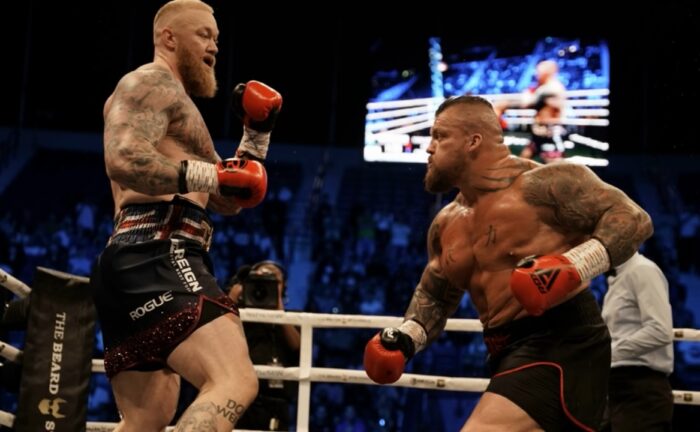 The big fight is over and the result is out, Hafthor “Thor” Björnsson triumphs over Eddie Hall proving his dominance one more time. However, that’s not the whole story. The Eddie Hall Vs Hafthor “Thor” Björnsson fight became one of the biggest successes in sporting history. Especially after a series of underwhelming “boxing” matches featuring the Paul Brothers against other athletes.

The Eddie Hall Vs Hafthor “Thor” Björnsson fight shattered people’s expectations in a good way. With both boxers weighing as much as they do, some people predicted that the match would be a slog to sit through. Instead, the audience was greeted with multiple rounds of high-octane action. Almost everyone was surprised with the stamina these massive athletes brought to the boxing ring. With all that said, here’s a quick post-fight analysis and the real reason why Thor won the world’s heaviest boxing match in history.

Thor is deceptively fast for a man his size, Eddie needs to keep those hands up and stop swinging wildly with those overhands. The tension is palpable. #ThorVsEddie pic.twitter.com/cOXgv6vsQa

Eddie Hall @eddiehallwsm brought an astounding level of energy and aggression to the fight. Like a tank, he held back punches during the earlier rounds only to deliver a heavy blow to his opponent. Eddie’s main strategy comprised of a knockout blow to Thor @thorbjornsson and he did come close to doing it several times during the match. However, Thor got back up on his feet every time he fell to the floor.

Eddie’s approach was aggressive but he knew the risks going in. Eddie did manage to land some heavy punches but Thor had plans of his own.

Thor’s approach, on the other hand, was fairly simple – To tire Eddie out, land punches to secure points, and avoid taking as much damage as possible. He did take some heavy hits but returned the favor in later rounds. Thor did manage to win but he was much more fearful of Eddie during the entire match than the latter was of him. Thor was fighting Eddie with a singular goal in mind, to win and so he did.

Thor defeated Eddie with a unanimous decision from the jury with 57-54 points and rightfully became the champion.

If you have a story or you want to write for PM shoot us email or DM on instagram.