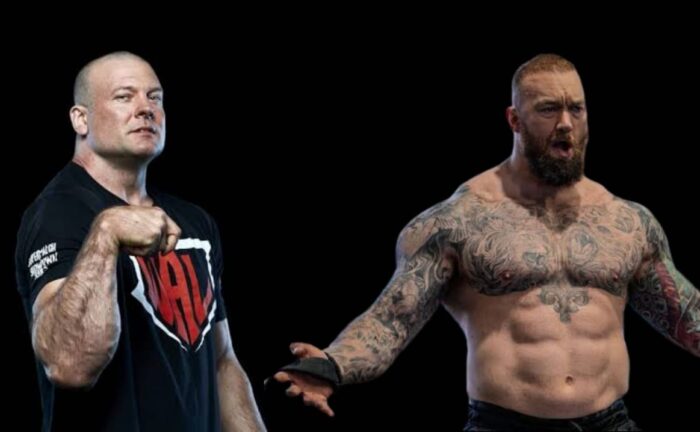 The boxing match between Eddie Hall vs The Mountain is on hold. The world’s strongest man, Eddie Hall, suffered a bicep tear injury and is said to be in recovery mode. Eddie’s injury was caught on tape in a recent viral video in which he can be seen training in his gym. In the video, he seems to be in a lot of pain as he screams our “F***. No. I’ve torn my bicep. It’s off.”

MTK Global confirmed that Eddie’s fight with Thor is postponed. As a result, Thor will now face Canadian Arm Wrestling champion Devon Larratt in Dubai. They had previously dubbed the matchup between Eddie Hall vs Hafthor “Thor” Bjornsson as the “Heaviest Boxing Match in History,” and rightly so as it features two World’s Strongest men.

When is Thor Vs Laratt: Both Competitor’s Strengths Compared

Hafthor “Thor” Bjornsson Vs Devon Larratt arm wrestling match will take place on Saturday 18, 2021 in Dubai. In terms of size and strength, Thor stands at 6ft 9in and holds the title of World’s Strongest Man 2018, he also has a record deadlift of 501kg / 1,105lbs.

As of now, Thor looks very slim compared to his appearance in the World’s Strongest Man in 2018. In an Instagram post with Larry Wheels, Thor looks just as fit as him.

Meanwhile, Devon “No Limits” Larratt stands at 6ft 5in tall. He is widely considered to be the world’s best arm wrestler of all time and is currently the number 1 ranked arm-wrestler in North America.

In his latest Instagram post, Larratt told his fans to get “ready for the biggest fight ever!!”

In a viral 2015 video, Larratt can be seen defeating Thor in a casual arm wrestling bout. Ever since then, fans of both athletes want to see an official matchup between them where each of them is ready to bring their “A” game. The upcoming boxing match looks to be the perfect venue.