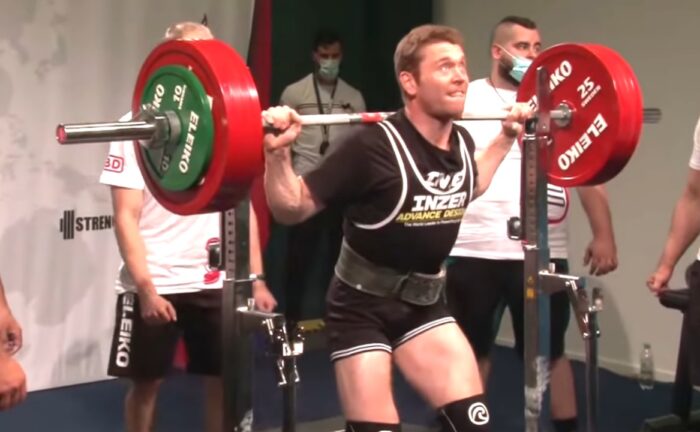 Mael secretly wore a squat suit but his malpractice became apparent when it was his turn to lift. While squatting, he struggled to gain depth due to his suit. It is a common practice in the equipped division. During both of his squat attempts, Mael struggled to hit depth but still managed to complete the lift.

His squat felt more like a weightlifting squat than a powerlifting squat as he only relied on his quads, as per one of the judges. In his third attempt, Mael struggled a lot but still pulled through and would’ve won a gold medal if he had not cheated.

Mael’s cheating became clear during benchpress as he wore a slingshot during all his attempts. A slingshot restricts your arms in the outward/upward position to help you during a heavy bench press. When Mael’s first attempt began, he quickly came on stage with both his arms up in the air and immediately sat down to squat. As soon as he completed his lift, he ran backstage to avoid any suspicion.

What’s really embarrassing is the fact none of the judges during the IPF One Powerlifting competition noticed that Mael’s suspicious behaviour. However, as soon as another powerlifter from Vikings Veneto @vikings_veneto confronted Mael, he started running away. Thankfully, the fellow powerlifter recorded the incident and uploaded it on Instagram.

IPF was also in the news recently for suspending USAPL over “too much drug testing.” While a lot of lifters want to compete in the IPF events incidents like these does put a stain on its reputation. Here’s to hooping IPF can work out its kinks.