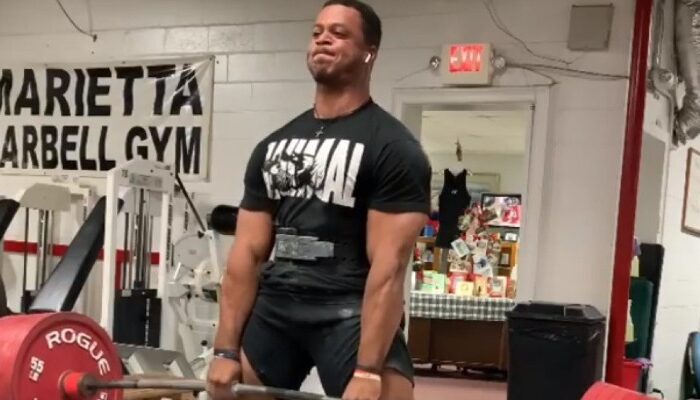 The 25-year-old powerlifter, Jamal Browner (@jamal_b15), recently suffered a minor injury during a deadlift. Jamal competes in the 110 kg class and is regarded as one of the best at raw deadlifts. What’s surprising is that Jamal reached his PR numbers in squat and bench-press but fell shy of 1000 kg/ 2204 lbs. total during the deadlift.

The incident took place at the recent Circle City Super event in downtown Indianapolis. Jamal started off with a successful 320 kg/ 705.48 lbs. squat on the first attempt. He increased the weight and easily achieved his PR by doing a 350 kg/ 771.62 squat.

He did the same routine and lifted 195 kg/ 429 lbs on the benchpress during his first try. Jamal quickly followed with a second bench-press attempt by lifting 215/ 473.9 lbs, which was also his PR, and failed. During his last attempt with the same benchpress weight, Jamal succeeded.

During his opener deadlift, however, Jamal tore his thumb open. On his Instagram, Jamal said that he “had a huge blood blister” after his last warmup and it ripped open at the top of the deadlift.

Jamal dropped the weight before the drop signal therefore his 410 kg/ 903.89 lbs. deadlift was deemed invalid.

Furthermore, during the lockdowns on 19 July 2020, Jamal managed to increase his deadlift to more than 455 kg. For reference, this weight is only 6 kg/ 13 lbs less than the all-time world record of war deadlift at 461 kg/ 1,015 lbs set by Benedikt Magnusson (@benni_magnusson).

Here’s to hoping Jamal recovers soon and comes back with a bang.