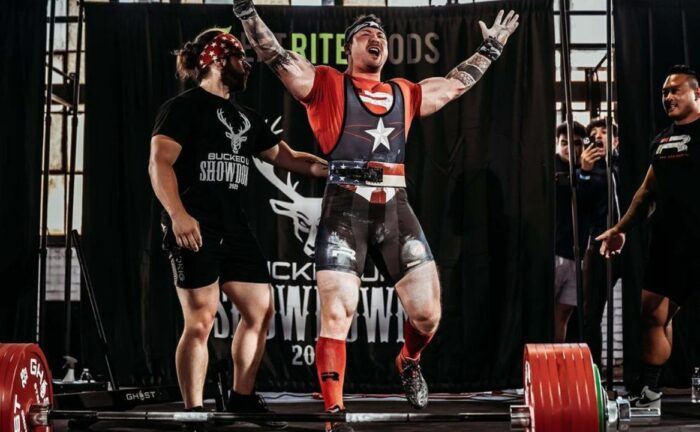 John Haack achieved his new record in the 90kg category
He successfully lifted 402.5kg / 887lbs in the deadlift and 263kg / 580lbs in the benchpress
John failed his third attempt in squat but still managed to break the 1000kg barrier

American Powerlifter, John Haack @bilbo_swaggins181 broke the 1000.5kg total threshold during the 2021 Showdown Powerlifting meet. Not only that, John became the world’s lightest lifter to do so. Two years ago August 3, 2019, John made the record of achieving a 907.5kg total and now he seems to have broken his own record by adding around 100kg / 220lbs to his total.

John Haack 1000.5kg Total Is A Feat of Pure Strength

Needless to say, John went into the 2021 Showdown Powerlifting meet with the best possible preparations. Starting off with the squat, John started with 317.5kg / 700lbs and progressed to 335kg / 738lbs. The next round proved difficult for him as he failed an attempt to squat 342.5kg / 755lbs.

We have seen John lift heavier before, his performance in the squat is in line with his recent 350kg / 771lbs PR, which he achieved two weeks ago.

However, John regained lost numbers during benchpress wherein he established a new PR. The powerlifter started off with a “modest” 235kg / 518lbs and quickly jumped to 250kg / 551lbs during his second attempt. After that, John went into overdrive and bench pressed 263kg / 580lbs. On his Instagram John had previously bench pressed 265kg / 584lbs, proving once again that he was well-prepped for this meet.

The house lit up in roar during John’s deadlift attempt as he started with 365kg / 804lbs and moved on to 385kg / 848lbs during his second try. In the end, John broke the 1000kg barrier by successfully deadlifting 402.5 / 887lbs and thus establishing a new world record. John Haack is now officially the first person in the 90kg / 198lbs weight class to achieve a 1000kg / 2204lbs total, and saying it out loud has quite a ring to it.