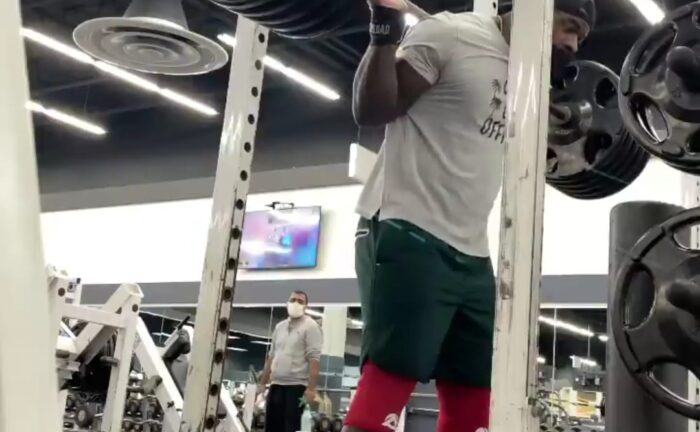 Rob Lewy @roblewy, a US-based lifter got kicked out of the gym for squatting 233kg / 515lbs like a professional athlete. Lewy uploaded a video on his Instagram showing him squatting and then being confronted by the gym’s co-owner.

“The Gym owner said “I’m having a hard time man. I am sorry but this is not a powerlifting gym,” the gym’s co-owner said. He also said that he has been the gym owner for the last 25 years and does not allow powerlifting.

And then he went to again reiterate that the gym is not a powerlifting gym. The owner even crossed the line by telling Lewy that he’d refund his money, essentially asking him to leave, in the middle of his workout.

Lifter Gets Kicked Out For Lifting Weights

The owner wanted to kick Lewy out for powerlifting. Lewy was not making any noise, he didn’t slam the weights, he was lifting very quietly and minding his business. Apparently, that was too much for the gym co-owner.

Lewy confirmed that he received a call the next day from the other owner’s brother, who apologised and asked him to come back. The guy mentioned that his brother can be a “headcase” sometimes but he’s overall a good guy. On that particular day, he had “billing issues” and “issues with customers” so he was frustrated.

But literally, every business on this planet has to deal with customer and billing issues on a regular basis, are their owners taking their frustration out on other customers? Obviously No. The gym owner might be a good guy but he’s a headcase for sure.

Additionally, Lewy mentioned that while signing up for this gym’s membership the waiver had no mention of a weight limit for any equipment. Meaning, the owner was making up rules just to disrupt’s Lewy’s workout.

To avoid any such drama in the future, Lewy left his old gym and joined a new one. He recently posted a video deadlifting 349kg / 770lbs telling us all that he’s back on track.