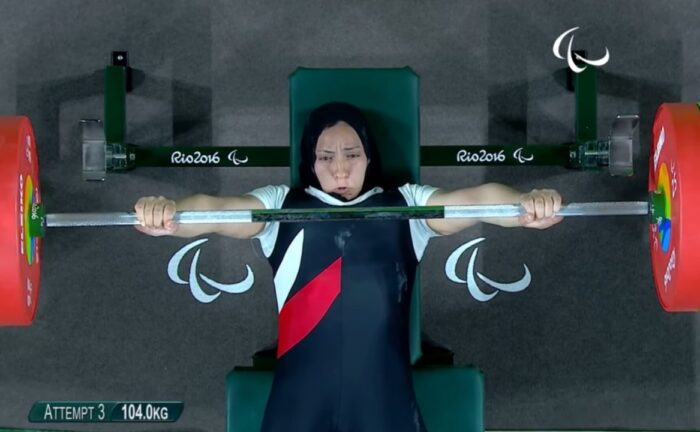 Rehab Ahmed set a Tokyo Paralympic record by performing a 120kg benchpress and scored a silver medal. The Egyptian powerlifter competes in the Women’s 50kg / 110lbs category and faced off against Hu Dandan, from China and Olivia Broome, from Great Britain.

Both, Hu Dandan and Rehab Ahmed successfully performed a 120kg benchpress at the Tokyo Paralympics 2020. However, the Gold medal went to the Chinese powerlifter. As per the rules, if two athletes lift the same weight, the one with less bodyweight becomes the winner. At the time of competition, Rehab Ahmed weighed 49.87kg, meanwhile Hu weighed 49.27kg.

However, the record for 120kg benchpress in Women’s 50-kg category still belongs to Rehab Ahmed as she was the first to perform the lift. What’s more impressive is the fact that all these women lifted twice their bodyweight in benchpress, which is an amazing achievement in itself.

Rehab wants to surpass her goal and lift 130kg in benchpress, as per her Barbend interview. Currently, the world record benchpress stands at 131kg which belongs to Nigerian Paralympian Esther Oyema.