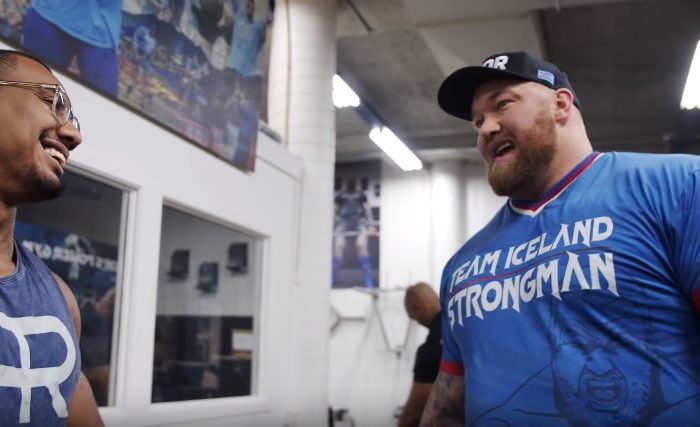 The Mountain Teaches Larry Wheels About The Elephant Bar

It’s been several weeks since Larry Wheels has been training in Iceland with Hafþór Júlíus Björnsson for the upcoming LA fitness strongman and subsequently for the Arnold Amateur Strongman.

Along the journey, Larry has learned log lift, how to stone lifts, how to use his lats while lifting weight above his head and finally he learned the difference between a normal bar and an ‘Elephant bar’.

A post shared by Powerlifting Motivation ™ (@powerliftingmotivation) on Jan 17, 2019 at 9:11am PST

Thor doesn’t have the real Elephant bar which is used in the strongman competition rather he has made a replica of it. In the video, he explains that the elephant bar is longer than the conventional deadlift bar. Thus he has also made his replica bar quite long.

Thor shares his experience with the elephant bar by saying that it whips a lot and tries to take you off balance. That’s why on his custom bar, Thor has also added Collister to increase the ‘whip effect’. He further explains that since he began training with his custom replica bar, he has faced fewer difficulties in lifting the real elephant bar.

In the video, Thor also explains his loading plan for the next two weeks. He lifted 880 pounds (440 kg) for 2 reps this week. For the next week, he plans to de-load the weight by a small amount and then the week after, he will go heavy again. Thor wants to become familiar with the same amount of weight over a longer period of time, before going to the next level. This type of training allows him to avoid injuries before the main event. Larry can also be seen deadlifting 727.5 pounds (330 kg) for 2 reps, however, he didn’t try his hand on the elephant bar.

Thor is already on the list of athletes which will be competing in the Arnold Strongman Classic 2019. So be ready for some serious action heading your way in the month of March. And for everything related to being a savage, stay tuned to Powerlifting Motivation.