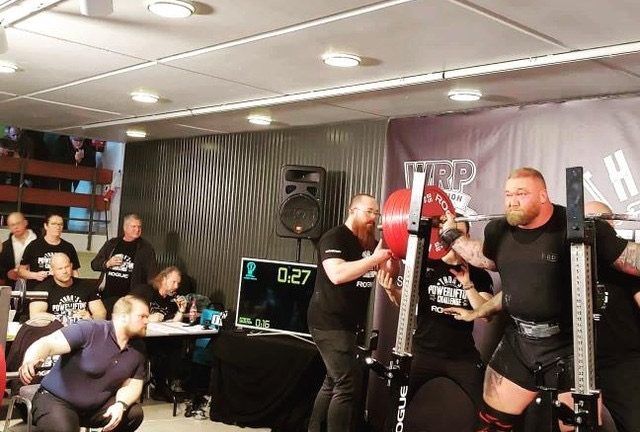 So I’ve collected my thoughts, watched plenty of vids from different angles, read thousands of comments, and I’d like to have my last say on Thors 1100kg total.

Firstly, it was a brilliant effort. He totalled exactly what I thought he would, based on his training vids, but I got it wrong. I’ll explain in a minute. Watching the guys doing Big Dogs training vids, they generally wont reveal their total, due to the intensity and pressure at the meet. Point in fact is in 3 years only Andrey Malanichev has pulled 400kg, despite the fact that the field is littered with 400kg+ deadlifters. Thors training vids would be much closer to the mark in regards to his total, and it proved so.

Thor’s 1100kg total equaled that of Bill Kazmaier, who hit 1100kg, but in a Marathon squat suit. It has been the biggest total ever in powerlifting by a winner of WSM. Don Reinhoudt is next with 1084kg. A caveat, they both beat the strongest powerlifters in the world, winning the IPF Championships multiple times, Thors 1100kg total is the 10th biggest raw total of All Time. It is the 5th biggest total of 2018, a year where the big guys have really put up some massive totals. I hope most of you reading this appreciate what a great total it was, but alas, I’m disappointed.

When I posted the 460kg squat vid, I saw he got 2 reds, one from the right and one from the centre. Instantly I was inundated by people asking my thoughts. I said on social media that I wont undermine judges that are sitting 10 feet from the action. At the time I thought that Boris as the centre judge had got him for missing a command. Yesterday I was shown a vid from the side, and told he got a red from Boris for depth.

Now you dont piss on monuments, but in my opinion, one of the worst looks in powerlifting is a red light for depth from the centre judge, when a side judge, who is placed there mainly to judge depth, gives it a white. It has happened to my boys in an international meet, and it leaves a bitter taste in your mouth. After viewing the side vid, it is so close, that you would be okay to have the side judges split, red or white, too close to judge. From the centre, impossible to judge, it has to be a guess.

Now I said I was disappointed, and that I erred in thinking Thor could only go 1100kg. Heres why. Thor, today, should be the first man in history to have squatted 1000lbs and pulled 900lbs raw in competition. He’s not. He has to walk away from that meet without a single record. I’m not comfortable with that, but it is what it is. I said he could only total 1100kg. In hindsight, he could have gone 470/255/420 – 1145kg without too much difficulty, based on his lifts at the meet, exceeding my expectations. Never did I think he had any chance to go over 1140kg, I’ve now changed my thinking.

A post shared by Powerlifting Motivation ™ (@powerliftingmotivation) on Dec 16, 2018 at 8:04am PST

Thor was put on this planet to be the strongest man we’ve ever seen, and he may just be. Whatever is next for Thor, he is in a position to pick and choose, and he’ll do whatever he fancies. A successful actor, the Worlds Strongest man, with the most dominant performance ever, WSM, Arnolds, Europes Strongest man and the Dubai meet, and now the 10th biggest total in history in powerlifting. I look forward to see what 2019 brings for him.

Fail how much on the bar? @K.hinriksson

A post shared by Powerlifting Motivation ™ (@powerliftingmotivation) on Dec 16, 2018 at 1:23pm PST