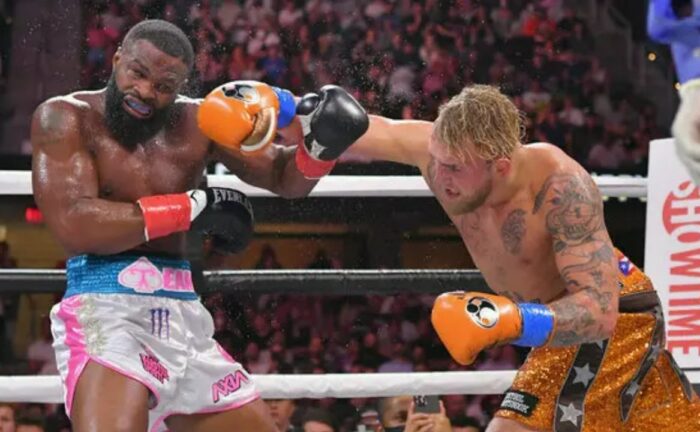 Famous MMA legend, Tyron Woodley @twooodley is ready to get an “I Love Jake Paul” tattoo if he loses a rematch against the famous YouTuber turned amateur Boxer, Jake Paul @jakepaul. For the uninitiated, Tyron Woodley, the known MMA Welterweight champion, lost a cruiserweight fight against Jake Paul, who is famous for internet pranks and quite recently, boxing.

Jake won a split decision against Woodley and this prompted the latter to seek a rematch, seemingly to settle the matter once and for all. After the match, Woodley, reportedly out of furious anger, walked up to Jake Paul and challenged him for a rematch.

Jake, knowing that Woodley is eager to get back at him, gave him a proposal – a rematch and the loser gets a tattoo in the winner’s name.

Of course, the internet exploded after the announcement and celebrities started sharing their take regarding the same matter.

Reacting to his own “bet” for a rematch, Tyron Woodley entertained the possibility of losing by saying that he’d not get a tattoo anywhere where he has to look at it. Although it’s hard to tell whether he’s being serious or not at this point.

Many MMA fans felt second-hand disappointment about the whole situation as well. Tyron Woodley is a famous MMA champ who defended his title four times. He’s had years of training but seemingly lost to a YouTuber turned boxer.

However, it is important to note that many people believe that Jake Paul took PEDs before the match while Tyron Woodley fought without any such aid. The age difference between both of them is quite huge, while Jake is at his prime at 24 years old, Tyron is almost 40.

The whole situation did manage to catch a lot of eyeballs and consequently, both fighters got paid $2 million. According to internet rumours, the Paul brothers are infamous for fixing fights. Jake’s older brother Logan @loganpaul faced match-fixing allegations from critics after his fight against the famous professional boxer Floyd Mayweather Jr. @floydmayweather.

Regardless of the absurdity of the situation, a lot of people are paying attention now compared to the first fight between Jake and Tyron. So expect the unexpected.